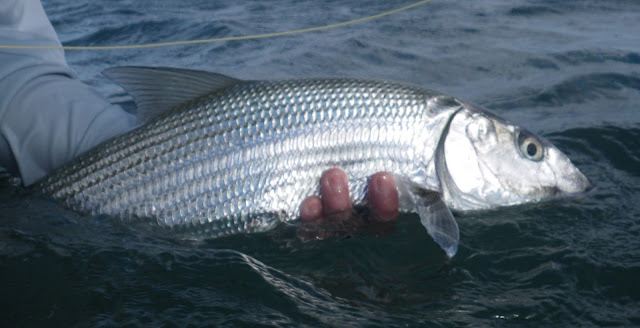 Snuck back to my home island of oahu last week for my dad's 80th birthday (happy birthday pops!).  while there i got a chance to get out on the water a few times. time was limited so i stuck to my favorites and for the most part they did not disappoint.

the lake...
my buddy kirk had the memorial day monday off so we went up to lake wilson in wahiawa to check things out.  being that it has been eight months or so since i was up there, i gave my boat the once over the day before.  i washed it, regreased the hubs, put air in the trailer tires, and ran the motor in the driveway a bit to make sure it still ran okay.  it did and on monday we were ready to roll.  well, sort of.

we got out on the lake and started heading toward our first spot when the motor cut out and died.  a few cranks. starts, and stops later i realized that, in all my preparation the day before, i had forgotten to check if it had gas!  yeah, kind of important.  so we started the cruise back to the ramp with the trolling motor so kirk could run and get some gas.  of course we fished on the way back and kirk got a nice peacock bass to get the afternoon rolling.

we made it back and kirk went off to get gas.  fortunately for us, a good samaritan was pulling out at the launch and offered to give us gas from his boat.  how awesome is that!  much mahalos to whoever that was.  i hope he is reading this.  that saved us a ton of time and renewed our faith that good still exists in this world.

i fished my g loomis classic glx 9' 5wt two piece (the ultimate lake rod) and an older hardy uniqua reel.  i also fished a sweet 4wt. bamboo rod that my buddy dean built a while back and matched that with an abel tr1.

that afternoon on the lake there were sporadic peacocks busting but we caught most of our fish off of structure or what i call "good wood".  some fish appeared to have been spawning but we did not see any on nests.  kirk said the water level had just come up (again).  a sudden rise in water level often "covers up" peacock bass spawning nests.  the recent rise also explained the lack of visible red devils along the shoreline. 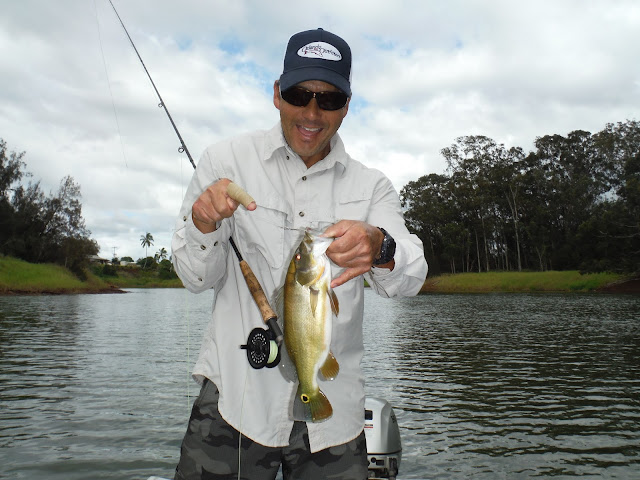 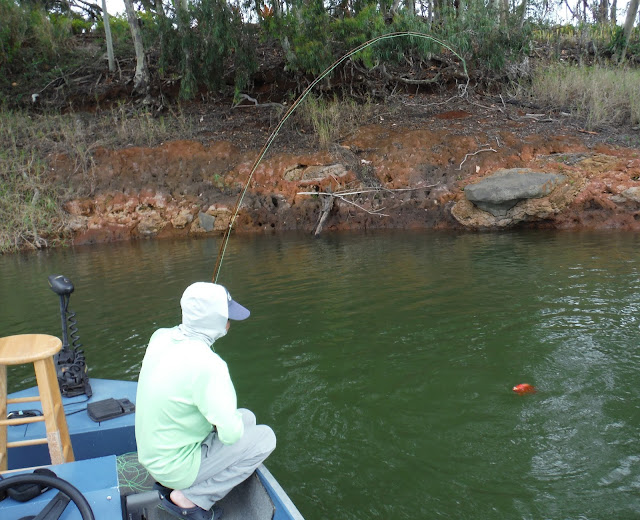 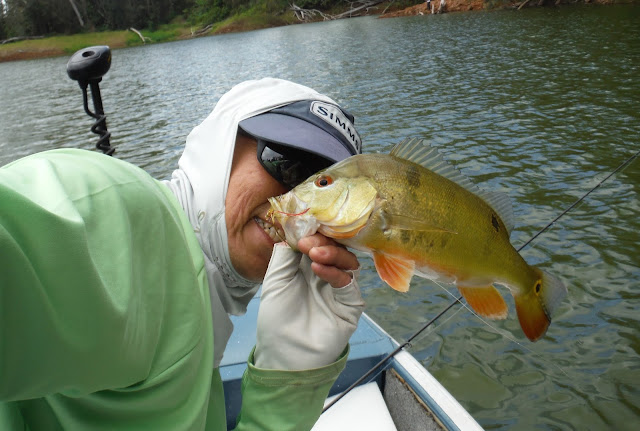 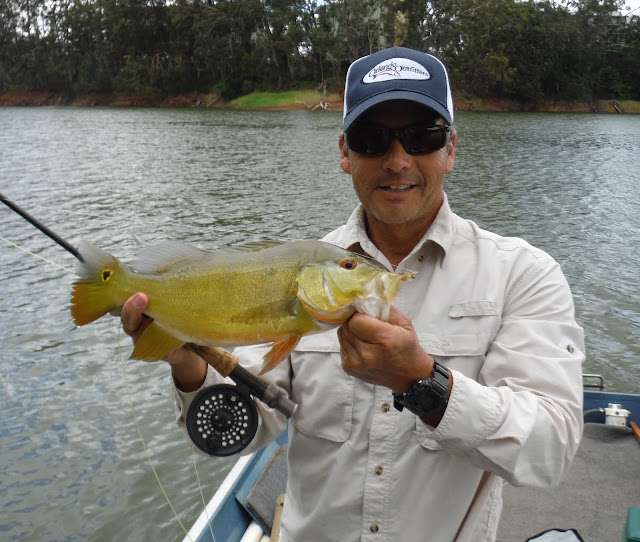 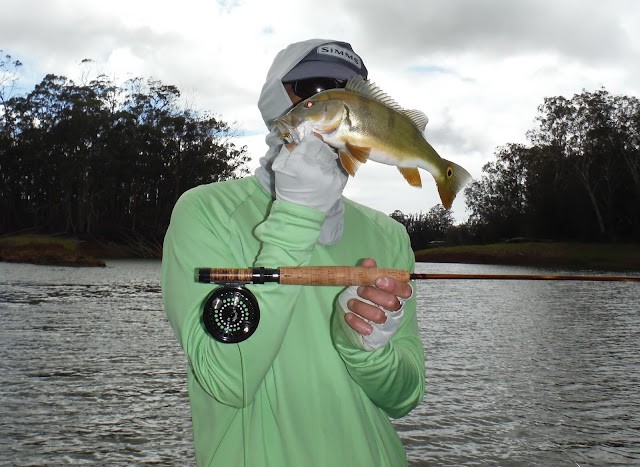 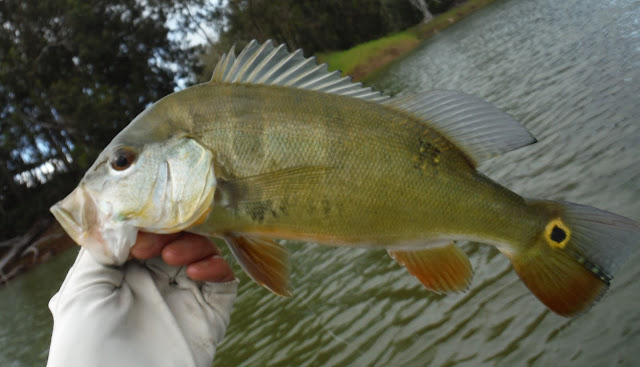 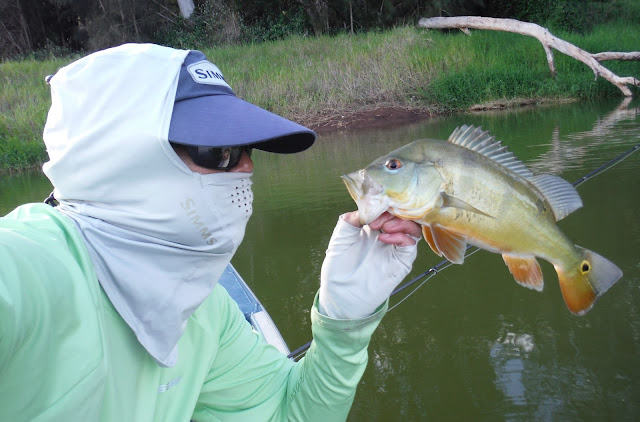 we fished until dusk, caught a bunch of tucs (peacock bass) and a few red devils.  despite the slow gas-less start, it turned out to be a great day on the water with one of my oldest fishing buddies.

kbay papios...
while back on the island i also went out to kbay.  apparently there has been quite a few papio (juvenile giant trevally) roaming around the island this year so i thought i'd spend an afternoon checking it out with doug and matt.  it turned out that the afternoon we decided to give it a go was a kona wind day (light winds from the south), this did not bode well for our superheroes as this type of wind can make fishing (of any kind) tough.  it can also bring some pretty wet afternoon/evening weather on the windward side of the island and boy did it ever!


undaunted, our super heroes charged into the fracas.  doug is an excellent waterman and made a valiant attempt to keep us out of the worse of it... but the skies were too overwhelming and relentless.  we were soon soaked to the bone.  it was a wet through the rain jacket kind of pounding that kbay is certainly capable of producing.

i fished a sage 790-3 rplx.  the sage rplx is the forefather of the rplxi, xi2, xi3, and now "salt" sage rod lines.  this rplx was the first top of the line sage rod i ever bought and it has served me well over the years.  an old scientific anglers system 1 678 reel click pawl reel was my choice on this day.  i chose to use this reel because i wanted something i could bang around in the boat and not have to worry about it getting scratched or nicked.  it is also a reel from the around the same time period of the rod (early to mid nineties) so i thought it would be fitting.  the line i used was a seven weight rio outbound which turned out to be perfect for making the quick long casts necessary to fish in a drifting boat with two other guys spin fishing.

the fly for this day was a modified miyawaki popper.  i have been fishing the miyawaki popper almost exclusively for sea run cutthroats in the puget sound and thought it would make a great fly for kbay.  this popper's design with its scaled down stinger hook and reverse slider head makes it really easy to pick up and cast with lighter rods.  the modifications that i made for my hawaii version were to use a larger edge water popper head and wire attached to the stinger style octopus hook (to hold up to cuda teeth).


the fishing was tough by kbay standards and it bomb rained most of the time making it short of pleasant and even a little cold.  the three of us toughed it out and managed to catch a few good sized barracuda and papio as well as a number of smaller papios.

like i always say, sometimes like that.  we played the hand we were dealt and in the end didn't do too badly considering.

back to the bones...
no trip back to the islands would be complete without chasing some bones.  so i did, on my last chance to get out on this trip back to the mother ship.  i planned to do some two handed bombing and was hoping that the trades would return before my trip was over.  they did not.  when i got out on the water, i was greeted by a chilly (for hawaii chilly that is) wind coming straight out of the north.  pretty rare for the end of may but sometimes it can happen especially when the kona winds are on the way out but the trades have not yet returned in force.  the cool north wind can also make fishing tough but i'll take them over kona winds any day.  as i waded out, the water felt a bit cooler than "ideal" for bones.  still, it felt great to be immersed in it.  there is just something magical about hawaiian ocean water that makes it different from any other waters.  i don't know how to describe it except to say that it has "soul".

there was also a bit of a summer south swell rolling in that slowed the afternoon ebbing tide.  i did not have the (loving) feeling that fishing would be easy.  would i be going home without catching, or even hooking, a bonefish?  it felt entirely possible to me.  i have felt these conditions many times before and knew that there would be some fish still around but it would take some work (and luck) to get on them.  all i needed was one.

fortunately for me i had my sage 6126-4 z axis, an abel switch reel, and a 385 grain rio scandi head and was prepared to cover some serious water.  with this set up i was able to easily cover water by the acre tipping the odds in my favor (if only a little bit).  when bombing for bones, you are not trying to cover every inch of water like you try to do when steelheading.  bones are constantly on the move.  instead you are trying to keep your fly in the feeding zone for as long as possible to try to get it in front of a feeding fish.  this task is not so difficult when there are a lot of fish around but when you are looking for the needle in the haystack, it can be a big big ocean. 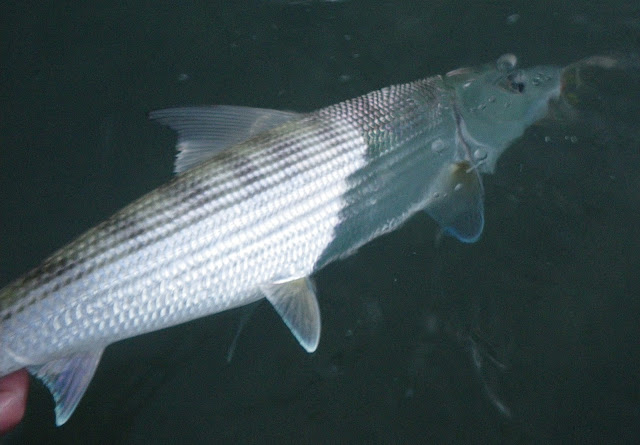 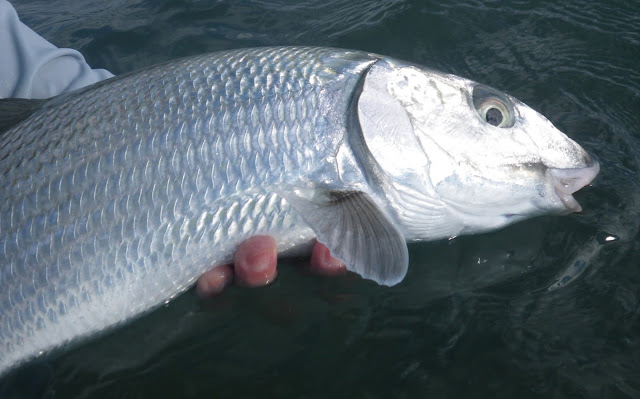 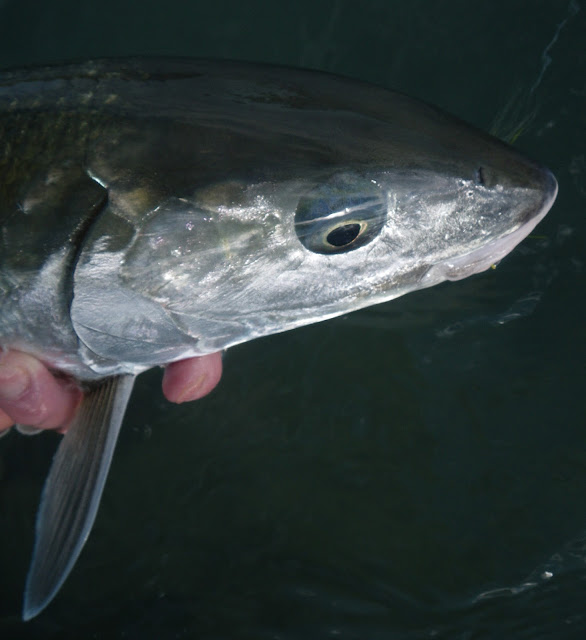 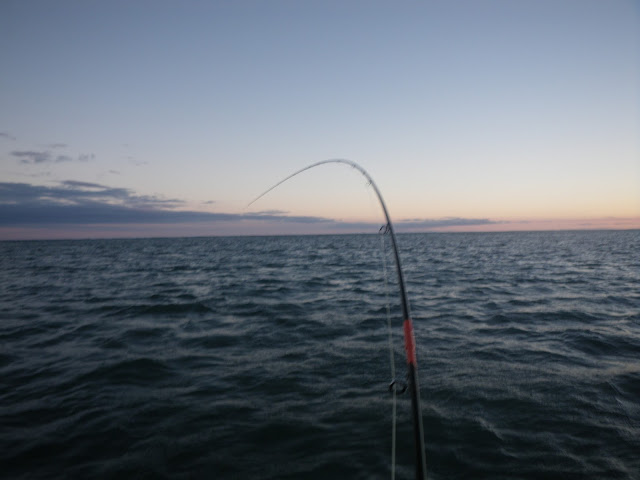 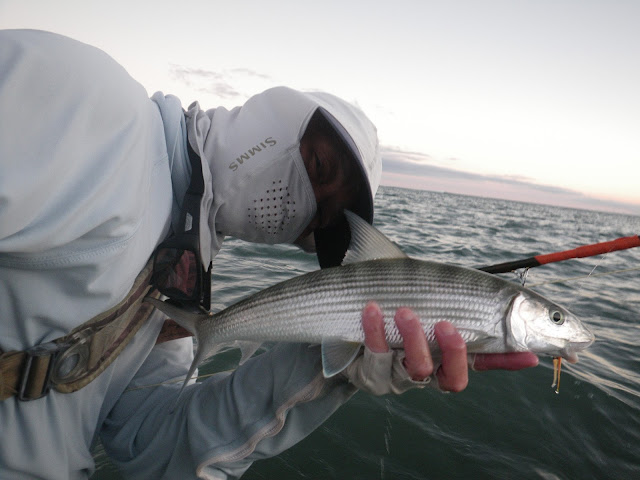 as the sun set, i tied into a little guy.  these smaller bonefish usually travel in groups so i probably could have caught a few more... or not.  having done this for many years, i knew on a day like the one i had with the conditions i faced, i would be wise to end on a fish rather than to press my luck.  best not to test the fish gods. 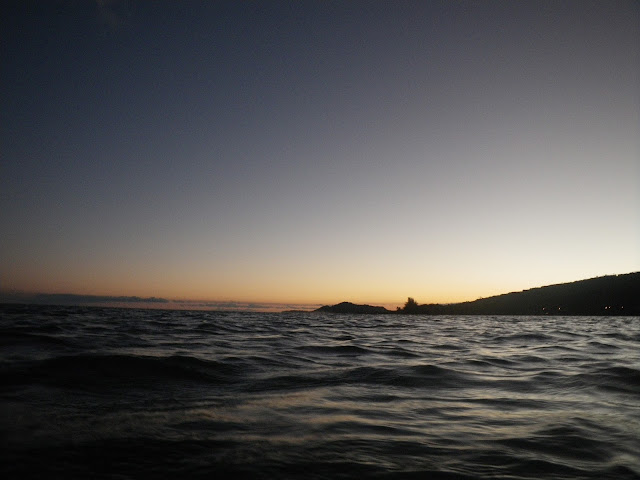 ...and that was that.  with so many crazy changes going on in hawaii, it was good to see that some things have remained the same.  tucs, devils, papios, bonefish... until the next time.  thanks for the good times.